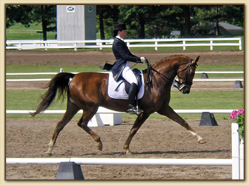 Dressage is the single fastest growing Sporthorse discipline today. The United States Dressage Federation reports that from 1990 to 2000, their membership grew a remarkable 104% ! When you consider that this is only for those people who elect to join the USDF, as a reflection of those people with horses in their backyards, and in boarding barns across the united States, who are dabbling in Dressage- this discipline offers a truly outstanding venue for the American Saddlebred to excel- and a phenomenal resources opportunity for the breed. The word Dressage comes to us from the French “dresser”, which simply means “to train”. It is a sport which is pyramidal in it learning structure; laying a foundation in the lower levels that builds and confirms an athlete for the upper level work of Grand Prix, or Olympic level, Dressage.

Dressage has at its roots, the classic Greek horsemanship. As with Eventing, at the Olympic level, Dressage was originally exclusively for Military personnel. First introduced at the Olympics in 1912, Dressage was not opened up to civilians for another 40 years. Today, civilians are the dominant force in Dressage.