Forty Something, owned by Jody Swimmer, is a 10 year old Saddlebred gelding.  Forty is one of our “hottest” horses in the barn, meaning is very electric off the leg which makes him like a little sports car to ride!  Chrissa Hoffmann started him as a 4yr old, from a saddleseat barn in the Louisville area.  She had to retrain everything he knew as a saddleseat horse.

Four years later, Chrissa showed him 3rd level in Spring of ’08 with scores in the 60’s.  After spending 3 months in Florida with Chrissa, he returned to compete Third level test 3 with Jody receiving a 64.3% earning her last score needed for her USDF Bronze Medal!   In October of 2009, Chrissa showed “Forty” in his first PSG class earning a second place ribbon with a 62.6%!

25th Edition of The Saddlebred

Chrissa and Forty Something,  were invited to participate in a photo shoot, for the 25th edition of The Saddlebred, a book produced and written by Judy Oetinger, of Prospect, KY.  Both Saddlebreds, Harry Callahahn and Forty Something, trained and shown by  Chrissa are featured.  Harry Callahan was trained and shown successfully to Grand Prix and Forty Something now to Prix St Georges!  Both Saddlebreds, to date, are the highest scoring saddlebreds competing at the FEI levles of dressage!  Photograph taken by Todd Buchanan, a professional equine photographer of MN.  Book will be binded and ready for WEG 2010!

New York City Slicker, owned by Jody Swimmer, is her young 5 yr old American Saddlebred who she has won countless awards on already!  Jody purchased him as a 2 yr old and has basically done all the work herself.  They earned the Young Horse Material Gold Medal for the 3 yr old Division at the American Warmblood Society, for 2008, with an outstanding, 72.7%!!!  He also was awarded USDF’s All Breeds 4 yr old Champion, with an overall score of 67.1% for 2009!  They also received the Gold Medal for the overall division, as he scored in the 70%’s!  “George” is dual registered with The American Saddlebred registry and American Warmblood Society.  He is a gorgeous 15.2 hand chestnut with chrome who has a huge desire to please.  He is definitely one of the cutest geldings in the barn.  He always has a smile on his face!  He showed First level this past summer, winning the class amongst warmbloods, with a 68%.  He has natural suspension in his trot and for his age, has an extremely well balanced canter.  Our goal is that George will follow in the famous Harry Callahan’s and now Forty Something’s footsteps, by reaching the FEI and maybe even Grand Prix! 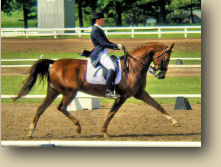 American Saddlebred gelding, Harry Callahan, won at Prix St. George on Sunday, May 28, at the Kentucky Dressage Association Spring Dressage Show. His score for the winning class was 65.5. He had two other very successful rides and was FEI High Point Champion as well. Harry is owned by Linda Cawthon and ridden by Chrissa Hoffman.

The 8 year old ASB Dressage gelding Harry Callahan (Supreme Heir X Make My Day by The New York Times) was invited to participate at the Robert Dover All-American Freestyle Symposium held at the Kentucky Horse Park April 21-23, 2006. ( Robert Dover is a 6 time Olympian in the sport of Dressage.)

In addition to being a demonstration horse for the Choreography section of the Symposium, Harry and his rider/trainer Chrissa Hoffmann, were part of the Saturday Night entertainment where they performed a beautiful Intermediaire-1 Level Freestyle to the music “Sing, Sing, Sing” and “Chattanooga Choo Choo.”

In their first test under saddle, Joy Congdon and Clicquot scored 65.7% at Training Level.  Clicquot is by Buck’s Co-Star out of Denmark’s Ruby Red and is owned by Susan Vine of Boxborough, Massachusetts..

In his first outing this year the 5 year old, Barry Be Good (Spanky) and Suzanne Kloud, finished 6th against some big name competition at Plantation Fields in Chester County, PA. His flawless cross-country round over the tough Training Level course was the highlight of his competition against a field of 15 other horse and rider teams. Spanky is by Mt. Zion’s Rhema out of Sweet Choice.