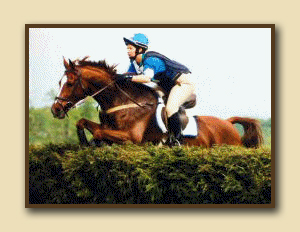 Eventing, like Combined Driving, is a competition consisting of multiple phases designed to test different aspects of a horse’s training and ability. The Three Day Event was introduced at the 1912 games in Stockholm. The Three Day Event was originally considered the ultimate challenge for the military charger. In fact, non-military personnel were not permitted to compete in the Olympics this discipline until 1956; women were banned until 1964.

The Three Day Event requires the horse and rider to compete as a team in three phases Dressage, Speed and Endurance and Stadium Jumping.

The Dressage phase demonstrates the harmony, obedience, and correct physical development of the horse. Riders must complete a prescribed test of required movements, each having a maximum value of ten points. There are also the collective marks; for rider position, submission of the horse, impulsion and quality of the paces. To the extent that each movement fails to meet the ideal, based on the judges evaluation, penalty points are incurred. This is the only subjective phase of the competition.

The Speed and Endurance portion of the test at the Olympic level consists of four parts 1) a short phase of roads and tracks, followed by 2)steeplechase, which is in turn followed by the 3) long roads and tracks. This phase is meant to demonstrate the horses endurance over a course of several miles, and to go at high speed over steeplechase sized fences. Riders incur penalty points for not being within the time allotted. There is a mandatory veterinary check after steeplechase and before the final part of the Speed and Endurance Phase. The vet check lasts ten minutes.

The final portion of the Speed and Endurance phase is the highlight of evening, cross country. This tests consists of 24 to 36 fixed and solid obstacles, which may be four feet high, and ten feet wide (at the base) some of which may require multiple jumping efforts (A, B, C, and D for example) as part of the same obstacle. In this phase, the riders incur penalties for falls or refusals. In addition, there are penalties for completing the course above or below the mandated time.

The final phase, on the last day, is Stadium Jumping. This tests the horses whether necessary energy, agility, obedience and desire to clear the show jumps following the tough test of his stamina the day before on the speed and endurance phases, requires a horse to negotiate a colorful course of fences differing in height, width and technicality, in the arena. A knocked down rail adds penalty points to the score.

At the end of the event, points are tallied, and the horse with the lowest score wins.

Not all events are Three Day Events. In combined tests, the horse competes in dressage, cross country and stadium jumping; there are no roads and tracks or steeplechase phases. Combined tests are offered at many levels, from Baby Novice (with fences as small as 2 feet, and simple dressage tests) to Advanced (in which the dressage tests include upper level movements, and in which the fences are as large as those in Three Day Eventing. Given most Saddlebreds enjoyment of jumping and willingness to “go” this sport is a natural for them.