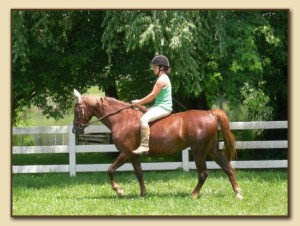 Not to sound like a total cliché, but every single picture I have taken with my horse, I look like a giddy 12 year old girl with a smile from ear to ear.  That could be because that’s how she makes me feel.  At the age of 26 I finally realized my dream of owning my own horse.  What I didn’t anticipate was that she would be one of the safest and honest horses out there.  Or that she would be a Saddlebred sport horse. Because before 4 years ago, I never even knew that Saddlebred’s existed.

Growing up, I dabbled in English and Western riding lessons here and there – when I could afford them.  Once I moved to York, PA I was desperate to get back into riding seriously.  I was at  the point in my life that I had the financial stability to pay for riding and shows and I was itching to find a barn where I could hang out at and not only enjoy the horses but the atmosphere as well.  Since I was new to the York community, I scoured Craig’s List looking for advertisements for riding lessons.  One ad caught my eye – riding lessons in exchange for barn work.  It sounded like the perfect situation and it ended up being one of the best decision I have ever made.  The ad was for Sorrelstone Farms – a huntseat focused barn that happened to specialize in Saddlebred Sporthorses.  Now, as a riding novice, I didn’t know a Saddlebred if it snorted on me, however, as soon as I was introduced to the farms resident Saddlebreds, George, Oscar and Alice – there was no way I could forget them.

As I grew in my riding capabilities and horse care experience under the guidance of Lillian, owner and trainer at Sorrelstone Farms, she and I both came to realize that her horses were not the best fit for me.  They were all very well trained, but just took a little bit more skill then I had under my belt.  And while I wasn’t the most timid person around horses, there were still some situations that made me question my aptitude – on the ground and under saddle.  But, at the same time, there was no way I was abandoning Lillian’s farm or the Saddlebred breed.  I wanted to become the owner of my own horse but the horse had to have the right personality – forgiving, personable and ready to catch me when I fell. 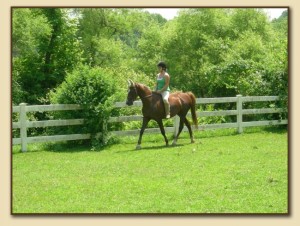 Although Lillian had a small farm compared to other big name Saddlebred trainers, she had the contacts and she made a few calls on my behalf.  A week later, Mirrored Beauty showed up at Sorrelstone Farm on a two week trial basis for me.  Beauty, whose name was very fitting, was a five year old, green broke, liver chestnut Saddlebred Sporthorse and instantly became the love of my life.

I quickly found out that the love of my life had quite the personality and she knew exactly what buttons to push, but she never went too far.  Besides her lovable personality (depending on who you asked) Beauty had two characteristics that are a testament to her breed – she was smart as a whip and at 5 years old she was as trustworthy as Lillian’s 17 year old packer.

In the past 3 years since I’ve own Beauty we’ve gone to breed shows and trail rides, I’ve ridden her in new “strange” indoor rings and we’ve gone galloping in an open field; she’s been used for camp, in lessons, and packing my non-horsey boyfriend around in 2 feet of snow.  She is a treasure and exactly what a Saddlebred Sport Horse represents – versatility.  One day we’re taking dressage lessons and the next day, I’m riding her bareback in the field with nothing but a lead rope tied to her halter and she’s the same horse. I never worry about my safety when I’m on her.  Beauty’s never going to be the fanciest horse.  She’s never going to make people go “wow” when they see her move in the ring.  But that doesn’t matter to me.  She’s irreplaceable in my eyes and I know I’m lucky that she found me.  I can’t wait to see where the rest of our journey takes us because I know it’s going to be a blast! And with her, I will always be that giddy 12 year old girl that beams with pride and joy when talking about my Saddlebred.